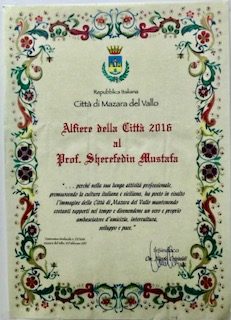 In the Jesuits’ Palace in Mazara del Vallo, took place a ceremony for the delivery of the courtesy title “Alfiere di Mazara del Vallo” to Mr. Sherefedin Mustafa, interpreter and translator of Macedonian origin, residing in the Netherlands, who for over 30 years has acted as an ambassador of Sicilian culture and traditions of Mazara del Vallo in the international arena. This distinction was conferred to him by the Mayor Nicolò Cristaldi accompanied by Steno Marascia, administrator at the time of the Encounters of Mediterranean Peoples organized by the late poet and humanist Rolando Certa.