Home > Blog > The making of 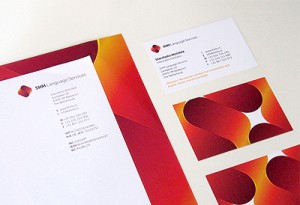 Perhaps it’s a bit of a cliché, but the internet has made the world smaller. The branding project for SHM, a Macedonian translator living in the Netherlands, was performed over the internet, by a Dutch designer living in Spain. It no longer matters which designer lives around the corner, what matters now is their portfolio and the connection between client and designer.

It didn’t take long to establish that Sherefedin and I were on the same page, because we are both passionate about our jobs. The comprehensive briefing I received was reminiscent of a manifesto. Sherefedin suggested that he thought of the transitions of M.C. Escher as an excellent metaphor for his profession, as a designer I could hardly hope for a better starting point than that. When creating a logo and a brand, it’s important to work from a concept. When a business operates according to an ideal, you often don’t need to look too far to find a fitting concept.

Escher tried to represent the relationship between what is graphically possible but realistically not, to create a seemingly impossible universe. In my opinion a translator does something similar. A translator’s client is also faced with an impossible universe: a foreign language, from which the translator creates a comprehensible whole. A transition takes place, just like in Escher’s work.
Of course I experimented with other ideas and sketches, too, but such a brilliant concept couldn’t be ignored.

It is important for a logo not to have too many focus points. It should say what it needs to with the fewest possible visual elements. That way, the viewer ‘absorbs’ the logo in one glance. By giving a logo layers, by working in the concept mentioned earlier, it gains tension, and becomes not only easy to ‘absorb’ but memorable as well.

Within the logo I designed for SHM there is a clear Escher influence: the seemingly impossible transition. An additional element is the S formed by the line through the logo. When repeated, the symbol’s fluid forms, continuous lines and subtle gradients also create a wonderful pattern, which we used for the back of the branded stationery.